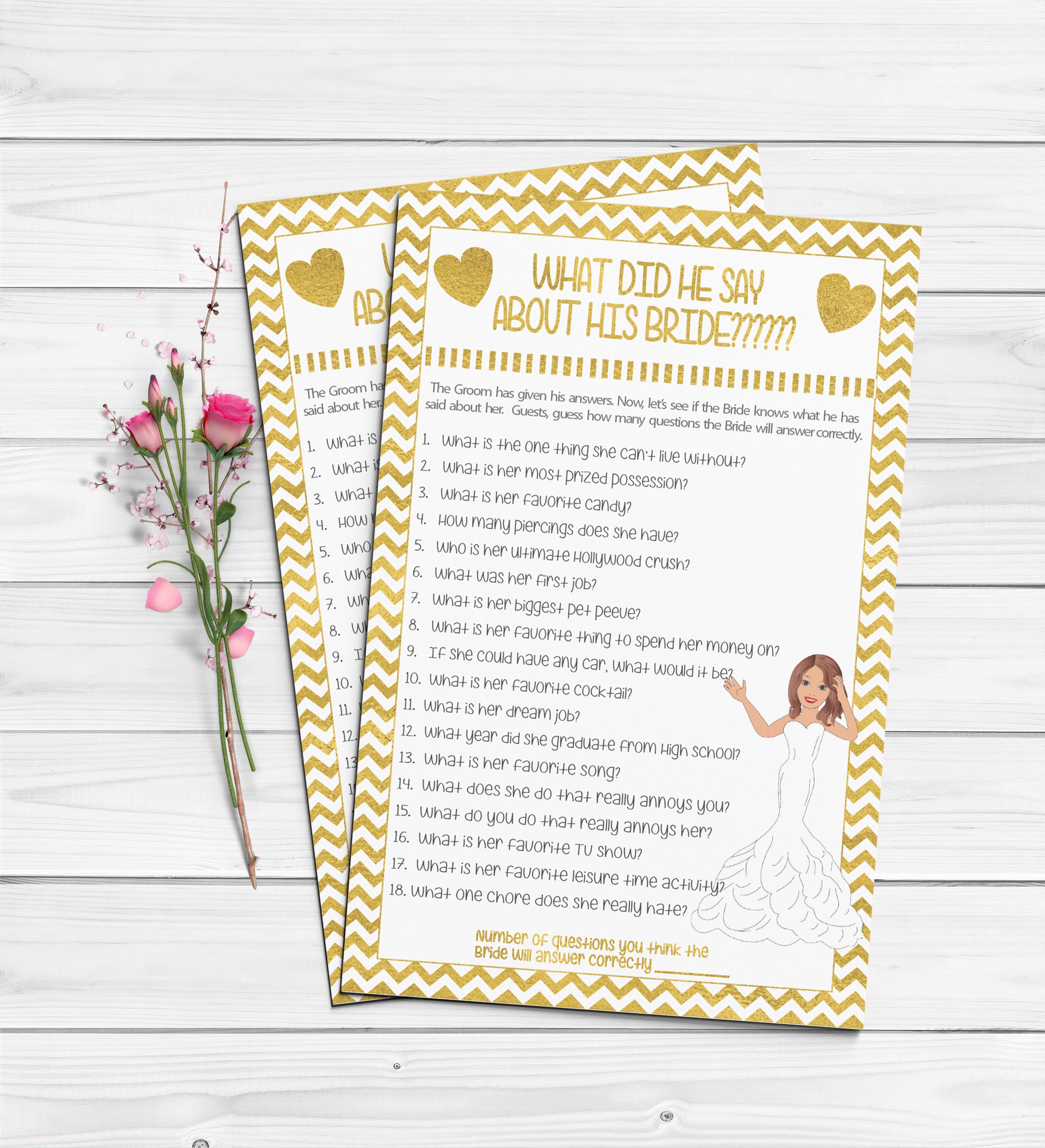 When hosting a bridal shower or baby shower, I think it’s always in the back of our minds that we want to throw the best shower anyone has ever seen.  We want everything to match perfectly and be beautiful to boot.  Unfortunately, most of us must stick to a budget while still wanting to achieve that she-throws-the-best-showers reputation.

The shower should be all about the bride-to-be or the new mommy or engaged couple.  But at the same time, it should also be beautiful, incredible, and something that will be remembered for years to come.

Yes, you can purchase store-bought games and save a little money, but those games are boring and blah.  Bridal and Baby shower games should be fun and involved everyone.  Getting people who have never met to talk to each other is what makes the entire shower fun.

So, you let your fingers do the walking by searching the internet for a printable shower game.  You find games you love that match your shower theme perfectly.  You have customizations made, making them even more perfect … then what?   Ugh, then you need to figure out how to print them so they look as beautiful in your hand as they do on the internet.

This is not as hard as you might think.  You can print the games yourself on your own printer or you can have them printed professionally.   Either way, getting them to look like they do on the internet is not hard if you know what to do.

All home printers print differently.  If you take your USB into one of the office supply stores and stick it into a printer and print a pink shower game, then do the same with another printer and another, you’ll see that each printer will print the pink color differently.  Some printers will print the pink drastically different while others print the pink in a lighter or darker shade.  It’s frustrating, to say the least, but it’s not the end of the world.  Rest assured, you can combat the color problem of home printing by using a better paper.

When I first began designing shower games, my daughter needed baby shower games for the shower she was giving and being mom, I didn’t want to disappoint her.  She is picky like me and said that the games at the discount store looked “cheesy.”  Knowing that I like to doodle and draw and that I had recently began an Etsy store, she asked me to design games for her that would match her baby shower theme.  Of course, her shower theme included gold.

First, I designed beautiful games that matched her shower theme perfectly.  I then drove twenty-two miles through the infamous Glenwood Canyon on the icy snow packed road to purchase a ream of paper at Office Depot.  I only needed thirty games and the “good” paper was expensive, so I was a little annoyed in knowing that I’d probably never again use the remaining two-hundred and thirty-five sheets of paper in the ream.

I drove twenty-two miles back home on the icy road, put the paper in the printer and nearly cried.   All the hard work and the hours I had spent designing the perfect game went down the drain.  The gold looked horrible on paper.  It looked, as my daughter often says, “cheesy.”  The game looked no better than one of those cheap games you purchase at a discount store.

I waited until my husband was off work so he could drive me back to Office Depot.  (He’s much better at driving on the icy roads than I am.)   I purchased a better-quality paper, but when I went home and printed the game, the gold still didn’t look right.  The colors were dreary, and blah and the gold looked washed-out.  Again, I was stuck with another ream of paper I’d probably never use.

After giving it some thought, I knew I had a good printer.  (Six months or so prior to this fiasco, I was the picky-impossible-customer at Best Buy with the USB in my hand, testing all the printers during their printer sale.)

My problem had to be the paper.

Twenty-two miles later, I stood in Office Depot wandering around their paper aisle for I don’t know how long.  Then I saw their printing counter, where they do the printing for you.  I dug through my purse, wondering if I still had that USB in there somewhere from several months ago when I purchased my printer.

Good thing I’m lazy when it comes to cleaning my purse!

I handed my USB to the lady behind the counter and she promptly printed a copy for me.  Ugh, it was no better than what I was printing at home.  Well, maybe a little better, but it still wasn’t the quality I wanted.  I had put a lot of hard work into that design and I wanted the game to print like what I saw on my computer screen.  Clearly seeing my disappointment, the clerk suggested using a more high-end paper.  She chose a paper with a matte finish and I gasped.  This is what I wanted in the first place!  It was perfect.   The clerk agreed to sell me the paper for twenty-five cents a sheet.  Ugh, for thirty games?  Oh wait, the games will print two per page …. fifteen pages … $3.75.  Yes, I can do $3.75.

I took the paper home and put it in my printer and low and behold, I was finally happy.  The colors popped off the page while the gold looked perfectly gold.  The design was clear and sharp, like nothing I’d ever seen before.

Total cost of paper $11.25 for three games for thirty people.  Cost of gas and stress to drive the twenty-two miles on bad roads …. never mind, I won’t go there.

A few weeks later, minutes after the baby shower, my daughter called me screaming with excitement.  She said that games were “a big hit.”  She also said that everyone was impressed at the way they were "professionally" printed and commented about how much fun they had playing the games.

Since this fiasco, I've found less expensive Matte paper and I couldn't be Happier with my printouts.  I've also found that I like using the Matte paper for printing pictures.  Not only does it make the pictures pop, it's also less expensive than photo paper.

I’ve been designing bridal and baby shower games for the last four years and from what I’ve heard from my customers, Office Max/Office Depot does the best job when it comes to printing.  They do it while you wait and are much less expensive than anywhere else.  Although I’ve only used them that one time for a “test” print, I’ve never had any negative reviews about them.

As far as paper goes, ask for a test print and if you’re not happy, ask them to use a better-quality paper.  Yes, you will pay more, but not much and it’s well worth the price in knowing that your games are not, as my daughter says, “cheesy.”

0 items in your cart